ARCAROLI, THE HISTORY OF A GREAT MAN

Everything started with Domenico Arcaroli 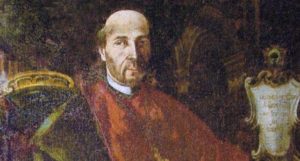 erdote and Vicar General in Policastro and Pro Vicario General in Manfredonia and in Andria.

to Pius VI and from 1776 to 1792 he became Bishop of Lavello, in the province of Potenza. It was only in 1792 that Domenico Arcaroli was entrusted with the episcopal seat of the city of Vieste which he held until 1817, the year of his official resignation.

His apostolate, in the diocese of Vieste, took place in a very difficult and troubled period of Italian history and the then Kingdom of Naples.

At the behest of the Bourbon government, returned to power and admirer of the prelate, he was awarded the title of Knight of the Royal Order of the Two Sicilies.

After his resignation to Pope Pius VII due to the reached age limits, but in reality determined by the many controversies that arose around his person and his work, he received from the Holy See, which actually recognized the merits of his high dicastery , the honorary title of Titular Archbishop of Bostra (Syria).

Domenico Arcaroli was the last Bishop of the city of Vieste because, dopol and his resignation, for economic reasons the archiepiscopal see was closed and merged with that of Manfredonia.

He spent the rest of his life in Vico del Gargano, his native village, continuing to write and study in his country house in the district of S. Biagio, where he died in 1826.

In the city of Vico del Gargano Arcaroli was a great promoter of the Academy of Excited VIcensi ‘on the heels of the various homonymous academies that arose, at that time, in various Italian cities with the aim of stimulating and encouraging local enlightened youth, the love for the sciences and culture.

His remains are remarried in the Chapel of the Sacrament of the Purgatory Church of Vico del Gargano which, it seems, was also the seat of the Academy.

What they say about us:

“On the advice of the maitre of our hotel we have come to you really good !! Antipasto with burrata, orecchiette with turnip top and typical dolcetto!

We loved it and then Vieste is characteristic it deserves. Good job !”“

“I was 6 days in Vieste with my girlfriend and we tried many restaurants, but I have to say that the most rewarding in quality and price was certainly this. If you want to eat good fish and Puglia specialties I recommend going there. I hope to come back very soon !.“

“We happened by chance in this great restaurant in the heart of Vieste.
The owners who also serve the tables have a preparation of the highest level. The dishes are presented with great care and elegance; absolutely to taste the spaghetti with oysters. We will return to Vieste especially to return to this wonderful restaurant.“